Continuing last year’s collaboration event, we, S.C.P. Japan, held an event with the Bridge Women’s Soccer Program on Saturday, March 5th, as a special event to celebrate International Women’s Day. The primary theme of this event was “Designing my life～how to authentically live your life”. We introduced the Bridge Women’s Soccer Program that will be presented at the 8th International Working Group (IWG) World Conference on Women and Sport. The event also included a session where a dialogue with the 35 participants took place – where they were divided into 7 groups with different topics.

Firstly Ms. Marika Fukuta, Ms. Satomi Yamaguchi, and Ms. Ayako Takematsu, who are the representatives of the Bridge Women’s Soccer Program, introduced the 8th IWG World Conference on Women and Sport, which will be held in New Zealand in November 2022. Additionally, they announced that the Bridge program was selected as one of the groups that will present at the conference.

In 1994, Brighton, UK, held the first IWG World Conference on Women and Sport, aiming to“encourage women to join various fields within sports”. Eventually, the conference was set to be held once every four years in various continents. In the 7th conference in the Republic of Botswana in 2018, the chief of the Japan Sports Agency presented about Japanese sports policy. As such, it would be a great opportunity for the Bridge Women’s Soccer Program to present  at an international conference like this.

The concept of the Bridge Women’s Soccer Program is “being the bridge that connects Japan and the world using the tool ‘soccer’.” The Bridge Women’s Soccer Tour has been held for about 30 years, and the total number of participants is over 500. Additionally, the program has been supporting people who want to study abroad in the U.S. through women’s soccer, and around 50 people have achieved their studying abroad goals. The founders of the Bridge Women’s Soccer Program are Ms. Miyuki Kobayashi, and Ms. Kanae Haneishi. Ms. Kobayashi originally had been executing the women’s soccer tour abroad, and they added the “Bridge” portion by providing study abroad support as well when Ms. Haneishi joined the Program.

The Bridge’s motto is, “It doesn’t matter how well you play soccer. We support whoever has a strong will.” The Bridge believes that it is important to become independent through the study abroad experience. Therefore, in the process of preparation, they help people become independent, through the procedures like sending an application, and contacting the coach at the universities.

Also, the “Bridge family”, who are those that have taken part in the tour or have studied abroad through the Bridge program, have been engaging in various activities regardless of their batches. For example, after the Kumamoto earthquake, the Bridge members visited and contributed via fundraising. They have also visited one of the women’s soccer clubs in high school in Okayama, and gave a presentation for the students about studying abroad and careers, which was valuable as many students in the countryside have fewer access to these information. 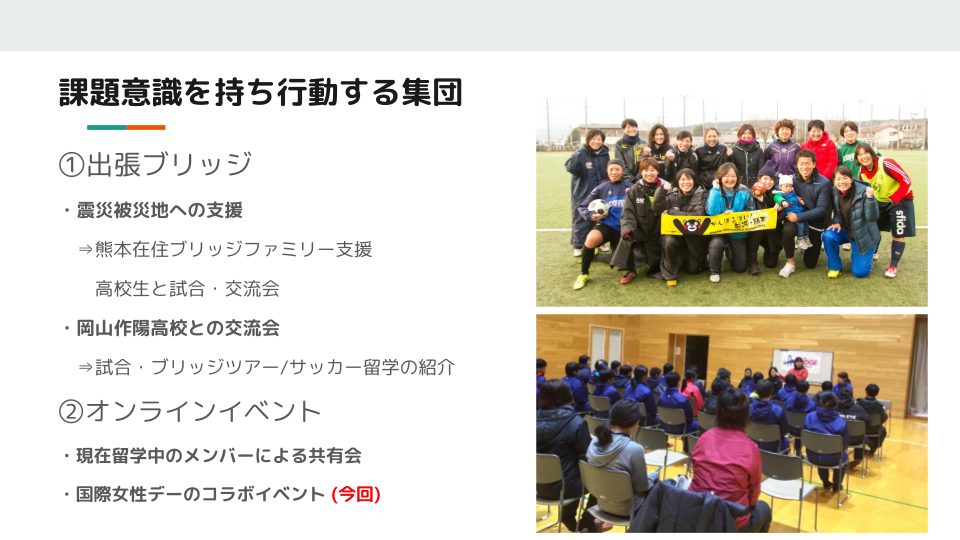 In the Bridge family, there are many people who explore and expand their possibilities, and design their own life. Ms. Ayaki Shinada who studied abroad through the Bridge program is one of the examples. She is currently working as an Indigo Dyer using a Japanese traditional method, called Sho-Aizome, after her professional soccer career in Europe.

After introducing the 8th IWG World Conference on Women and Sport and the Bridge Women’s Soccer Program, we divided participants into 7 groups and had discussions about various topics. The group with the topic of “Childbirth, childcare, and my life”, shared their ideas about the importance of forgiving themselves for not being perfect, while sharing their struggles between childcare and jobs.

The group of “How do you make decisions in your life?”, mentioned that it was important to gather information and follow your heart when making your decision.

From the “LGBTQ+, Gender diversity” group, they shared the difficulty with living in the society where gender is seen as only as a dichotomy, either man or woman.

Ms. Kobayashi, one of the founders of the Bridge program, rediscovered the importance of the Bridge family connection, saying, “I’m happy that this event came from the Bridge family. We’d like to continue being active.” Also, Ms. Haneishi, who is also the founder, emphasized the significance of celebrating International Women’s Day, saying, “It will take a long time to make a change. But we can change it someday by being patient, have a strong mind, and take action together.”

Finally, each participant wrote down a note about “what you can start from tomorrow to design and live your own authentic life”, and we took a group picture with their notes. We appreciate the opportunity to be able to talk about what we have been pondering about individually.

Last but not least, thank you so much to those who participated in this event, the Bridge members who cooperated, and those who volunteered as a sign language interpreter.

On January 28th, we organized the 4th time of BreakTalks. The theme for this Break-Talks was “Mental Disorder.” Ms. Asuka Fujii, who writes lead paragraphs for S.C.P Japan mail magazine and is a person with mental disorder grade three, spoke about her tough and encouraging experiences of having a mental disorder.

In the first half of the talk, Ms. Asuka Fujii talked about her personal story. Specifically, she taught us when she was diagnosed with depression, how she has tackled the disorder, what exactly bipolar disorder is, and why she decided to get a disability certificate, a special notebook that ensures handicapped people’s well-being. In the other half of the talk, Ms. Asuka Fujii answered a variety of questions from the participants.

Since the age of nine when she joined a local soccer club, Ms. Asuka Fujii always enjoyed playing soccer. However, from a certain point, she became less enthusiastic to play soccer. She, being described as diligent by a lot of people, was diagnosed with a mental disorder when she was seventeen. At the same time, she was interested in teaching soccer instead of playing it. Although she studied coaching in university and continued teaching soccer after graduation, she is now looking for a working life that suits her mental state.

While she went to school for a few days in the 12th grade, she quit her school and took a test that grants her a high school diploma. However, she experienced depression in her university and working life, so she was constantly out of her university and job. Later, she was diagnosed with recurrent depressive disorder and was hospitalized for once. In that mental condition, she obtained a grade three of mental disability certificate.

In 2019, she quit her job again. After one week of examination at a hospital, her diagnosis changed from the recurrent depressive disorder to bipolar disorder.  Bipolar disorder is a mental disorder that repeats mood shifts ranging from emotional highs to lows. In manic high periods, she becomes talkative and causes overwork. Immediately after the periods, she suffers from depressive periods. This kind of mood shift occurs once a year, but she can now control an intense mood shift with medicines.

Present and the Future Life

She is not fully confident about working, and she is still on a journey of finding a way to embrace herself. According to her, as others’ support has helped her a lot, good relationships with family, hospitals, and counselors are indispensable.

She also puts forward the use of social services. Welfare services let people fully rely on a variety of experts, which eliminates the need to complete everything by oneself. This is one of the reasons she decided to acquire a disability certificate. She also takes the advantage of rework services, transition support for handicapped people, and working day-care service. She is striving for the future in which she finds something she can grow as a person.

In the last half of the BreakTalks, Ms. Asuka Fuji answered questions from participants. One of them asked how to explain depression to children. She shared her experience to answer the question. When she was diagnosed with depression, her parents said, “Depression is just a disorder. It is curable.” This simple response definitely made her feel better.

After the event, a lot of participants said that they are happy to learn about bipolar disorder, as it is rather a minor topic to talk about. Everyone expressed gratitude to her for sharing experiences.

S.C.P Japan continues to introduce people with a variety of  information and experiences through BreakTalks, which certainly brings an occasion to explore diversity and inclusive society.

Thank you for each participant with a unique background. We appreciate the time and dedication they offered.

Thank you also for Ms. Asuka Fujii, volunteers, and sign language interpreters, who all made this event special. We hope to work together in the near future.